At 5:20, Ventura says, "Let's take care of our own backyard. Why do we spend the obscene amount of money on defense that we spend? The United States spends more than the other twenty-five leading countries on defense, combined... If we would get out of these stupid wars we would have all that money to fix our infrastructure, to fix our own country. And I think that deserves a priority, more than fighting in the Middle East."

Ventura is right. Cumulatively, we're spending trillions on war but allowing our infrastructure to fall apart. Our deteriorating water lines are poisoning children with lead; our aging dams are putting people's lives at risk during heavy rain events (as South Carolina found out last year); and our sub-par roads contribute to 14,000 highway deaths each year. And yet, we're hungry for more war, we're hungry for more defense spending, and we're eager to line the pockets of the military-industrial complex shareholders - who are safely tucked away in their private compounds, secluded from the masses, and drooling for more conflict and dead bodies. To them, war is little more than a money-making video game - a game where they can shift numbers around and watch the body count grow alongside their fortunes. But for the non-wealthy, war just means death (see, e.g., "US Troops Killed in Iraq and Afghanistan More Likely to Be Poor Than in Previous Wars," Alternet, November 3, 2016).

At 7:57, Ventura says, "Certain things can't be used as money-makers; certain things have to be used as services to provide for a culture, and to raise everybody up in that culture so that we all get a fair chance."

Ventura is right again. And the neglect of our infrastructure shows that, as a society, we are abandoning the concept of the common good - opting instead for a culture based on Ayn Rand's philosophy of greed and selfishness. She believed, as do her modern-day disciples, that everyone should just pursue their own selfish interests. To them, there is no common good. And this belief is at the root of many of the problems we're experiencing today, for example, children drinking lead-contaminated water while the richest 400 Americans keep adding billions to their wealth. Ayn Rand's philosophy of greed and selfishness is the diseased philosophy of sociopaths. It is a philosophy that makes the rich richer, while millions of children are killed by air pollution, poisoned by contaminated water, and impoverished by apathy and indifference. 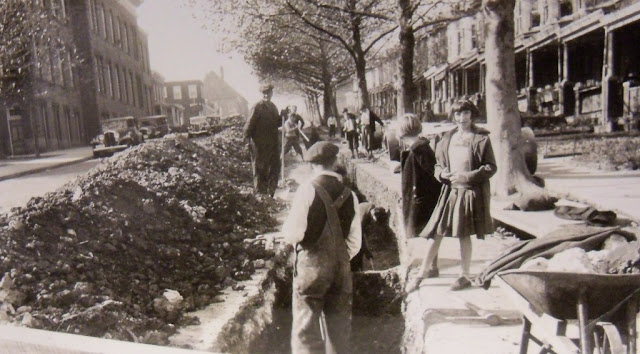 Above: A WPA waterworks project in Baltimore, Maryland, 1935. Thousands of New Deal waterworks projects delivered clean water to children, and removed wastewater, both of which served to improve the health and well-being of children. How did Ayn Rand feel about this? Well, she probably wasn't too keen on it. In 1936, she wrote: "My feeling for the New Deal is growing colder and colder. In fact, it's growing so cold that it's coming to the boiling point of hatred" (Jennifer Burns, Goddess of the Market: Ayn Rand and the American Right, New York: Oxford University Press, 2009, p. 38). Photo courtesy of the University of Maryland College Park Archives.
Posted by Brent at 9:38 AM