A WPA project for the Chippewa 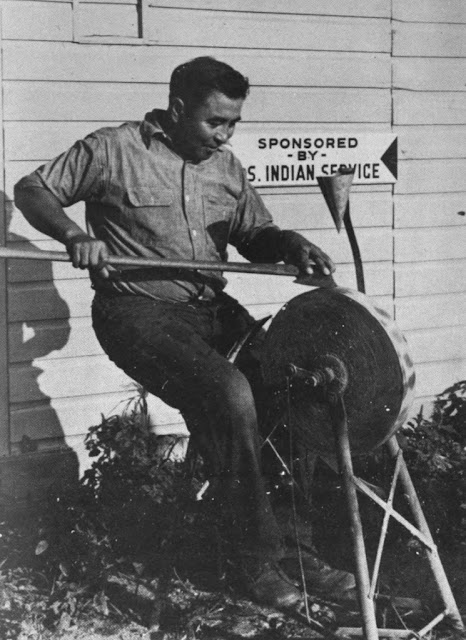 Above: William Nickaboine, a Chippewa Indian, on a WPA land-clearing project in Minnesota. From the August 1941 edition of Indians at Work.

John Collier, the Indians at Work newsletter, and FDR's comments on the American Indian 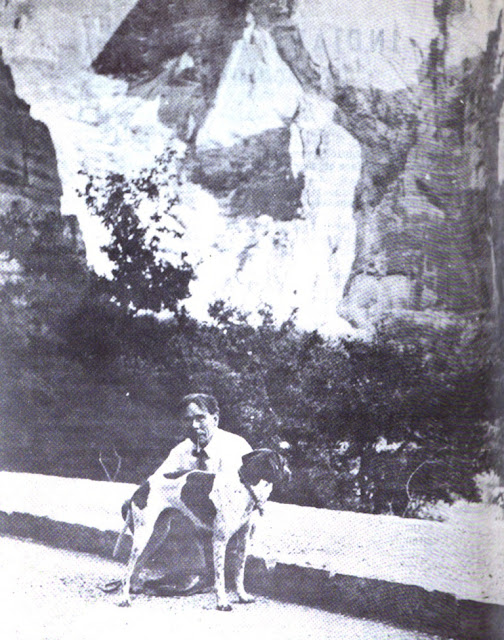 A chronicle of the Indian New Deal

The Indians at Work newsletter ran from 1933 to 1945, the same years that John Collier was commissioner of the U.S. Office of Indian Affairs. It is an amazing source of information for those wanting to know more about American Indians during the New Deal; more specifically,  American Indians during the "Indian New Deal." Over the coming months I'll be highlighting interesting stories, photos, and artwork from Indians at Work - stories about the Indian Division of the Civilian Conservation Corps; PWA and WPA public works on Indian land; political developments of the Indian Reorganization Act; artwork facilitated by the Indian Arts and Crafts Board; and more.

Indians at Work ended with a special memorial issue, Indians in the War, highlighting the sacrifice that American Indian tribes made during World War II. It also ended, ostensibly, because of a paper shortage. But paper shortages are temporary. The reason Indians at Work permanently ended probably had more to do with congressional and public indifference to the well-being of American Indians (in his resignation letter, Collier alluded to growing congressional apathy). After the New Deal, and especially after 1980, Americans increasingly rejected the general welfare... let alone the welfare of those on reservations. Many American Indian communities have long suffered from poverty, unemployment, and suicide; and Congress and the general public don't seem overly concerned about it (see, e.g., "Serious issues plague Native American communities," KTTC (NBC affiliate, Minnesota and Iowa), November 23, 2021).

In a contrast to modern disregard, and in reply to John Collier's resignation letter (January 1945), FDR highlighted the New Deal's approach to Native American issues:

"During the last twelve years, more than ever before, we have tried to impress upon the Indians that we are indeed Christians; that we not only avow but practice the qualities of freedom and liberty and opportunity that are explicit in our institutions. We have come to treat the Indian as a human being, as one who possesses the dignity and commands the respect of fellow human beings. In encouraging him to pursue his own life and revive and continue his own culture, we have added to his worth and dignity. We have protected the Indian in his property rights while enlarging them. We have opened the window of his mind to the extent that we have had money with which to do it. We have improved his medical service, we have enlarged his intellectual program. We have protected him in his religion and we have added greatly to his political stature. All of these things have been done under your leadership because of your wisdom and courage... [I] hope that, in the future as in the past... you will continue to achieve lasting benefits for the descendants of those misunderstood and misused human beings who originally possessed this great land of ours and who were displaced involuntarily, all too often with a selfish disregard of their right to live their own lives in their own way." (From Indians at Work, January - February, 1945.)

Some of FDR's words might sound paternalistic by today's standards; but considering pre-New Deal cruelty towards American Indians, and post-New Deal indifference, they sure sound good to me. 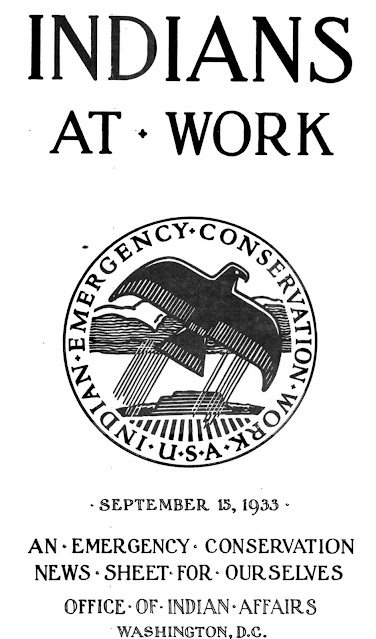 Above: The cover for the September 15, 1933 edition of Indians at Work. In the graphic, we see "Indian Emergency Conservation Work." This was an early name for the Civilian Conservation Corps - Indian Division. The CCC would prove to be one the most important and beneficial New Deal programs for American Indians. Image courtesy of Hathitrust.
Posted by Brent at 6:45 AM No comments: 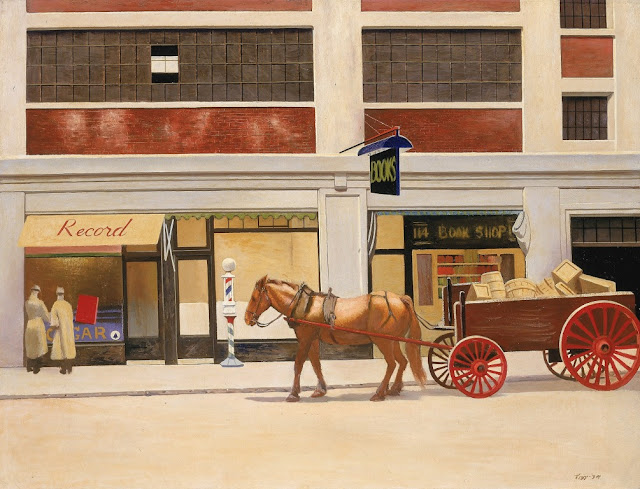 Above: "City Store Fronts," an oil painting by Francis Criss (1901-1973), created while he was in the New Deal's Public Works of Art Project, 1934. Image courtesy of the Smithsonian American Art Museum. 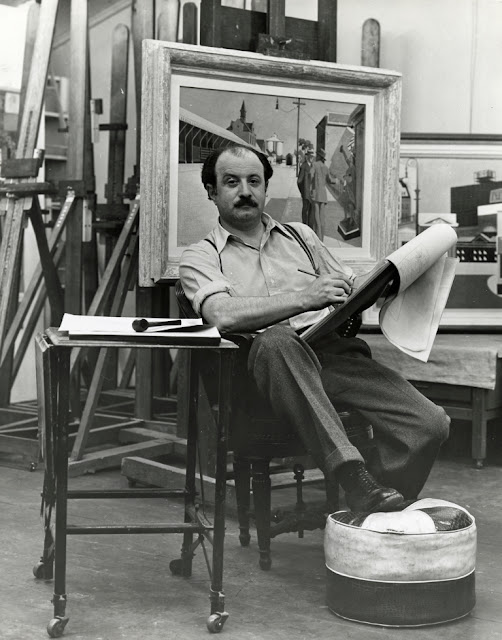 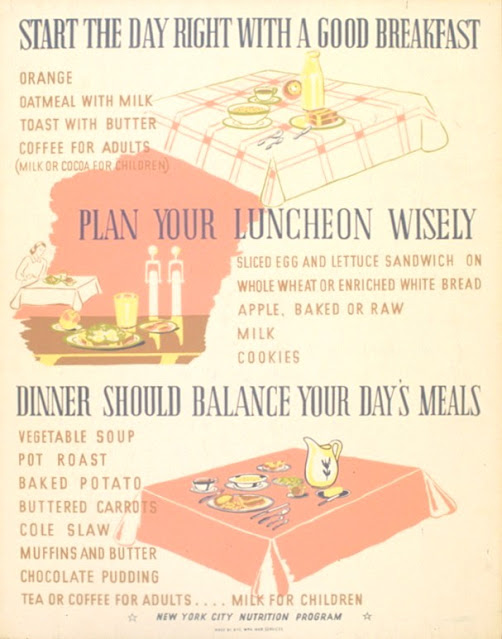 Above: A WPA poster promoting nutritious meals, ca. 1941-1943. Image courtesy of the Library of Congress. 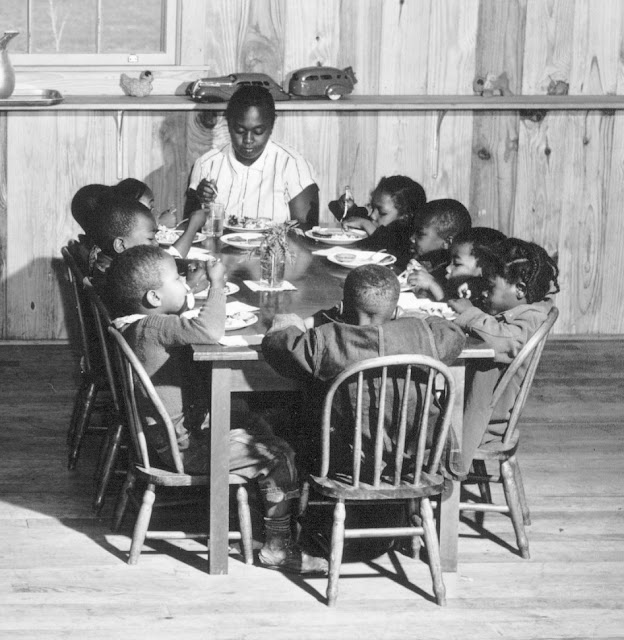 Above: Children eating a hot lunch at a Farm Security Administration migratory labor camp in Florida. The New Deal provided food to the less fortunate during the 1930s, not only in migratory camps, but also through the Federal Surplus Commodities Corporation, WPA lunch programs, three square meals in the CCC, and more. Photo by Marion Post Wolcott (part of a larger photograph), Farm Security Administration, provided courtesy of the Smithsonian American Art Museum.
Posted by Brent at 3:52 AM No comments:

The CCC protected our sequoia trees. Today, ignorance and apathy are killing them. 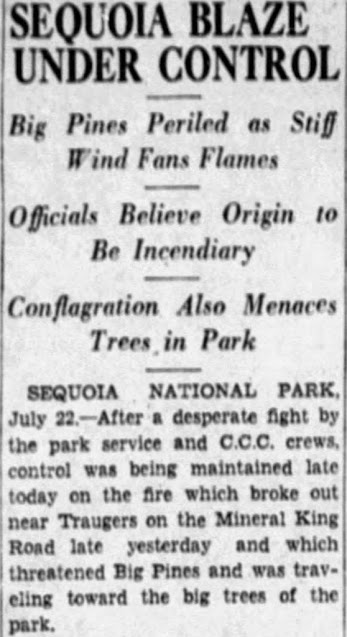 Above: Part of an article from the Los Angeles Times, July 23, 1934. Image courtesy of newspapers.com.
Sequoias Burning, Billionaires Giggling

During the New Deal, the Civilian Conservation Corps (CCC) protected America's giant sequoia trees, as well as many other trees. By putting out fires and reducing wildfire fuel, the CCC boys greatly reduced the amount of acreage burned in the nation's parks and forests (see, for example, my blog post, "CCC fire prevention and firefighting: How successful was it?" February 27, 2021).

Today, ignorance and apathy are killing our sequoia trees ("Up to 19% of the world's 'irreplaceable' giant sequoias lost to fire in about a year, study finds," USA Today, November 19, 2021).

Too many people refuse to acknowledge man-made climate change, and then actively block needed change. They ridicule the Green New Deal while sequoias go up in flames.

And too many people prefer to give tax cuts to the rich, instead of providing more revenue to government for needed firefighting resources (more manpower, more equipment). The rich, in turn, use their extra after-tax money to buy European mega-yachts, luxury doomsday bunkers in New Zealand, private islands, and politicians (how any of these "job creator" investments create good-paying American jobs I do not know).

Jeff Bezos even wants to build a space hotel--called "Orbital Greed Reef"--so that, I assume, billionaires can watch the sequoia smoke from the comfort of their luxury, celestial suites.

Yes, our planet heats, burns, and floods... as the 1% build spaceships for their 1% progeny to escape in. And the duped and doomed masses will wave goodbye to the billionaire brats rocketing off to Andromeda, comforting each other as the flames approach, "Well, after all, it was their money." 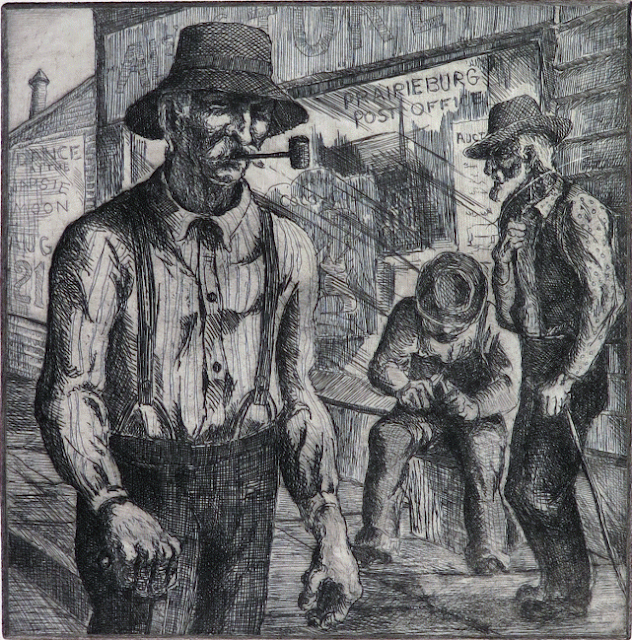 Above: "Retired," an artwork by Don Emil Glasell (1895-1965), created while he was in the WPA's Federal Art Project, 1937. Image courtesy of the General Services Administration and the Baltimore Museum of Art.

CCC fire prevention and firefighting: How successful was it? 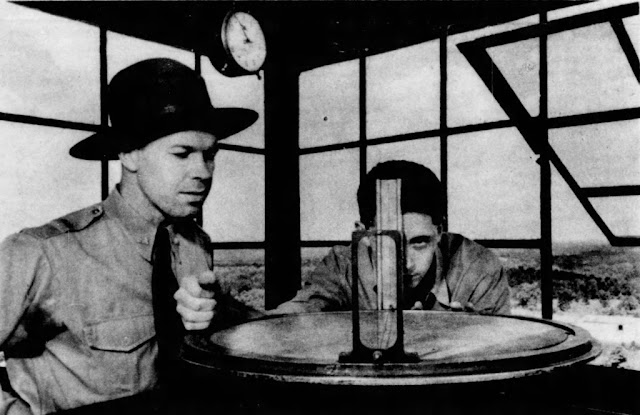 Above: In a fire lookout tower in Kentucky, 1939, a forest ranger and a CCC enrollee demonstrate a turntable device that helps pinpoint wildfires. Photo from The Courier-Journal (Louisville, Kentucky), September 10, 1939, provided courtesy of Newspapers.com, used here for educational and non-commercial purposes.

CCC Firefighting: A history of speed

From 1933-1942, millions of men in the Civilian Conservation Corps (CCC) built firebreaks, fire lookout towers, and forest access roads. They also fought wildfires and removed wildfire fuel. How successful were these efforts?

2. Fewer Acres Burned: California's 1934 fire season was the least humid and most windy since 1924. In 1924, there were 1,932 fires that burned 762,150 acres. In 1934, there were 2,054 fires that burned only 82,773 acres. The CCC's role in the reduction was explained: "Each C.C.C. camp had a special fire crew ready for call at all times of the day or night, but the whole camp, or several camps, often would take part in suppressing a large fire. Forest officers give high praise to the spirit and determination of these boys, to whom a large part of the credit is due in the saving of valuable forests and watersheds" ("More Fires, Lower Cost," Los Angeles Times, November 4, 1934, p. 66).

3. More Money for the CCC! In 1940, U.S. Congressman Francis Case (R-South Dakota) argued for more funding for the CCC because the CCC boys were so good at their job that they had saved South Dakota more money than what the CCC program had cost for his state. "In the Harney forest alone," he said, "there were more than 100 fires last year, but CCC control had held the burned area to an average of one acre per fire ("Case Fights Cut in CCC Funds," Rapid City Journal, March 8, 1940, p. 2).

4. Manpower and Speed: Similar to the previous point, CCC Director James McEntee wrote that quick response was the main firefighting strategy of the CCC: "If men and equipment can catch a fire when it is small, the war is won. That is the principle upon which the CCC operates. CCC men build small roads and truck trails into the forests so they can quickly move men and equipment into the areas where the fires start" (Now They Are Men: The Story of the CCC, 1940, p. 22). U.S. Department of Interior statistics highlighted the success of this CCC strategy (as well as the value of overwhelming manpower). For example, in the National Parks, where the CCC was the main firefighting force, the average acreage burned, per wildfire, ranged from 20-86 acres between 1930 and 1932 (before the CCC), but only 3-18 acres from 1933-1939 (Department of Interior fiscal year report, 1940, p. 209).

5. Saving our Forests: In 1937, it was reported that fires in the national forests, during the season, were only a third as destructive as normal. Credit was assigned to favorable weather conditions, improved equipment, and "the presence in most national forests of trained, mobile firefighting corps of Civilian Conservation Corps workers" ("Report Smallest Forest Fire Record in Service Annals," Associated Press, in St. Louis Globe-Democrat (St. Louis, Missouri), October 24, 1937, p. 24).

6. Saving Private Land Too: When the CCC ended in 1942, the head forester for the southern region of the United States wrote, "Largely through the fire control improvements and facilities constructed by the CCC it has been possible for the state foresters in the southern region to provide fire control for millions of acres of privately-owned timber lands that otherwise would have continued to suffer severe damage annually" (Perry H. Merrill, Roosevelt's Forest Army: A History of the Civilian Conservation Corps, 1933-1942, 1981, p. 51). 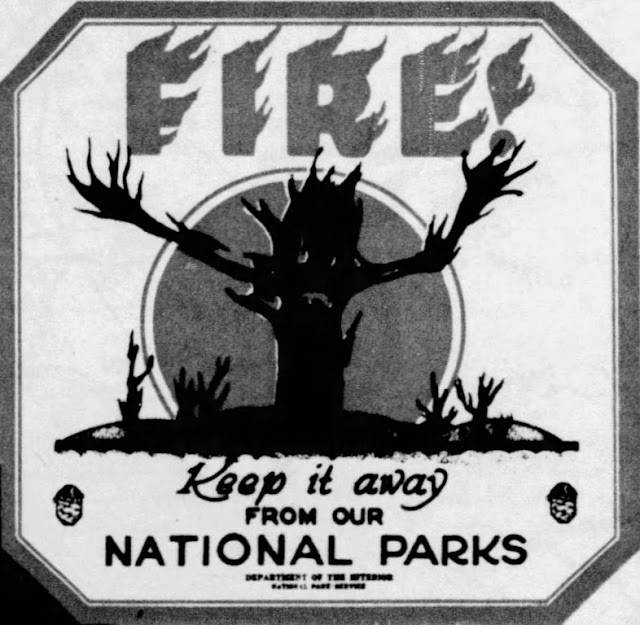 Above: The description for this image reads, "Millions of these stickers are distributed annually in National Parks over the country. They help to make park visitors conscious of the need for fire prevention. Constant vigil is needed to spot fires from the lookout towers before they get beyond control. The C.C.C. firefighters then go out and put them out as quickly as possible. Image from The Courier-Journal (Louisville, Kentucky), September 10, 1939, provided courtesy of Newspapers.com, used here for educational and non-commercial purposes.
"Then [we] went to work in the woods, cutting fire breaks which are 25 feet wide and extend around each square mile. We also do what is called Fire Hazard Reduction work. This work is in connection with fire breaks. Cleaning up all brush, dead trees and logs within 50 feet on each side of fire breaks. We are also building truck trails out into the forest... I have re-enlisted for another six months period. I am well satisfied and feel that I was lucky in getting in the C.C.C... I am taking a course in forestry. There is plenty to learn about this work and I am studying hard..."
--H.T. Bonds, Company 479, C.C.C., Alabama, in "What the Three C Boys of Co. 479 Are Doing," Our Mountain Home (Talladega, Alabama), October 25, 1933, p. 4.
Posted by Brent at 12:22 PM No comments: