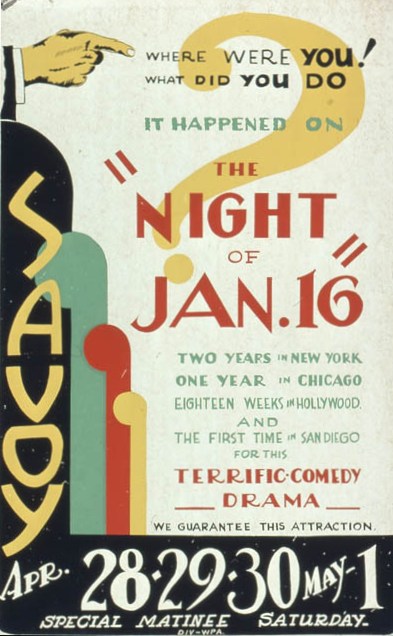 Above: A WPA poster, promoting the WPA's performance of The Night of January 16th, a play by Ayn Rand. Image courtesy of George Mason University, used here for educational and non-commercial purposes.

Ayn Rand was no fan of the New Deal, writing in 1936: "My feeling for the New Deal is growing colder and colder. In fact, it's growing so cold that it's coming to the boiling point of hatred" (Jennifer Burns, Goddess of the Market: Ayn Rand and the American Right, New York: Oxford University Press, 2009, p. 38).

Rand, it seems, could not come to terms with the concept of a government that was truly of the people, by the people, and for the people. Perhaps due to her traumatic experience during the Russian Revolution and/or her privileged upbringing, Rand appears to have considered the New Deal to be another wrongful taking of wealth from the "heroic" upper-class, to give to the "undeserving" lower classes. We see the same type of anxiety in right-wing politics today, for example, when U.S. Congressman Paul Ryan (an Ayn Rand disciple) divides the country into "makers" vs. "takers."

But Rand's cold feelings towards the New Deal did not prevent her from making a buck off it. According to author, journalist, and professor of literature Anne Heller, "Although by 1936 Rand strongly disapproved of Roosevelt and his New Deal programs, the WPA provided her with royalties of ten dollars per performance [for The Night of January 16th], a small fortune, throughout the later 1930s" (Ayn Rand and the World She Made, New York: Random House, 2009, p. 95). Rand wrote The Night of January 16th, a courtroom drama, around 1934, and it enjoyed commercial success for a few years before the WPA, and other theater programs across the country, picked it up.

Now someone might say, "It was Ayn Rand's brilliance that benefited the WPA!" But one of the main goals of the WPA's Federal Theatre Project was to bring theatre to people who might not otherwise see it, e.g., lower-income groups. Hence, the WPA probably broadened Ayn Rand's audience, which perhaps contributed to the eventual Hollywood film version of her play, from which she also profited.

This wasn't the last time Rand would benefit from the New Deal and similar "collectivism." It is now legendary, of course, that she collected Social Security and Medicare benefits when she needed them. (Why didn't she just use her John Galt superpowers to gather the needed funds? Why did she rely on the "nanny state" to see her through tough times?). And in the early-to-mid 1940s, when Rand was sitting comfortably at home, developing her goofy ideology, many lower-income Americans who had been in the CCC or WPA (the type of people and programs that Rand despised) were working collectively in the defense industries, or fighting and dying collectively in Europe and the Pacific... for her freedom to sip iced tea, take amphetamines, and write about the superiority of all the wealthy businessmen who populated her dreams.

And I wonder how many New Deal roads, bridges, airports, and parks Ayn Rand made use of. We'll never know for sure, but you can bet it was plenty. But Rand, like so many others on the political right (then and now), seemed to be oblivious to the collective work of the labor class, and how their work benefited her on a daily basis, in terms of freedom, transportation & infrastructure, recreation, public health, public education, and overall social stability.

Ayn Rand and her imaginary friend John Galt had the freedom and tools to become successful because of the collective work and sacrifice of millions of people; specifically, the very people they had contempt for.

The Narcissistic and Willfully Ignorant Philosophy of Ayn Rand and Her Disciples:

"'The community' never gave anyone anything... It is 'the community' that should give back to the wealth-creators. It turns out that the 99% get far more benefit from the 1% than vice-versa. Ayn Rand developed the idea of 'the pyramid of ability,' which John Galt sets forth in Atlas Shrugged... 'The man at the top of the intellectual pyramid contributes the most to all those below him, but gets nothing except his material payment, receiving no intellectual bonus from others to add to the value of his time. The man at the bottom who, left to himself, would starve in his hopeless ineptitude, contributes nothing to those above him, but receives the bonus of all of their brains.'"


Note: Harry Binswanger seems to have benefited from collectivism quite nicely too. According to his Wikipedia page, he "is a scion of Binswanger Glass Co., founded in 1872 by Samuel Binswanger." The Binswanger company's website explains that "After the Depression, the company began to grow again, and in 1947, Binswanger Mirror was established to meet the increasing demands of a post-war customer base and take advantage of the building boom that followed World War II... Today, Binswanger Glass has 65 locations in 15 states and continues to expand."

Well, golly gee, why was there a "building boom" after World War II? Because, in large part, the economy was able to expand along New Deal roads, across New Deal bridges, and out of New Deal airports. And the "customer base" was stronger, in part, because of Social Security and higher, union-obtained wages (the New Deal helped strengthen unions) - both of these things, and more, increased the ability of Americans to buy goods and services. Even Republicans understood the economic value of the New Deal, espousing several of its policies in their 1956 party platform. I wonder if Mr. Binswanger knows this... or perhaps he thinks Ayn Rand and John Galt built all the roads & bridges that brought the new customers to his family's business.
Posted by Brent at 5:07 AM